SAP Co-CEO Bill McDermott said in testimony on Monday as SAP kicked off its defense in a software theft lawsuit brought by Oracle in U.S. federal court.

This is criminal.
You know that as well as I do.
Stop blaming… Leo Apotheker! He left in Spring 2010.
What has been done is severe, but what has not been done since is even worse.
You may find below an excerpt from my communications with Swiss Diplomatic Services.

Now it’s your turn; the floor is yours.
Sincerely, 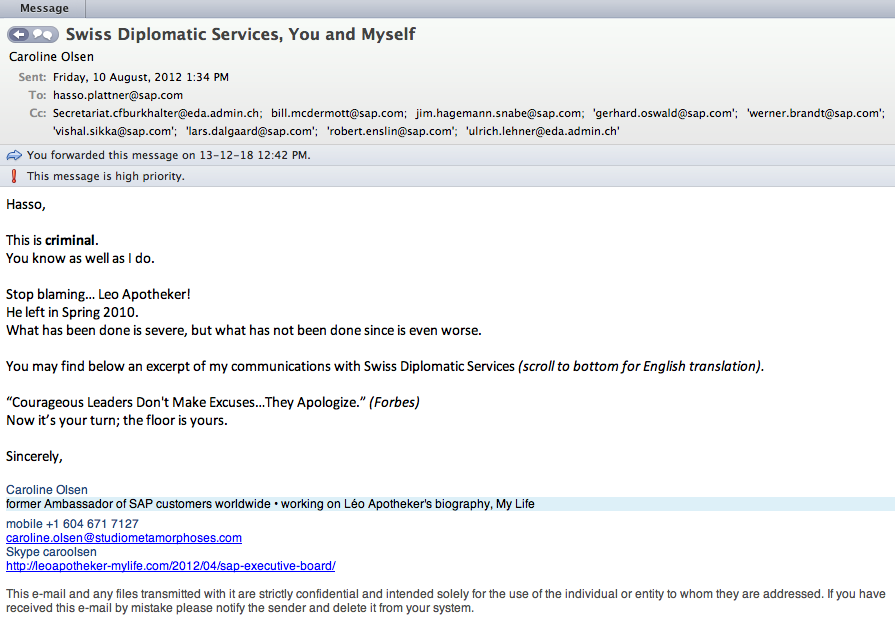 The following is an excerpt from the message that was sent to the Swiss Diplomatic Services, in May 2012.

Sent: May 17, 2012
From: Caroline Olsen
To: Swiss Diplomatic Services

A year and a half later…
We have been out on the streets since May; there is nothing left.

Eva Joly only survived her encounter with corruption in France because Norway, her country, reached out to help.
The story around Leo Apotheker (SAP) is far bigger than that of Elf.
I must face a criminality without borders and without any limits. And I am facing it alone.
My surroundings? Those who do not understand, those who doubt, and those who understand perfectly but are afraid.
[…]
We have been out on the streets since May; there is nothing left.
This is the result of my encounter, despite myself, with the outlaw side of SAP – the art of corruption on a global scale – orchestrated by the SAP Executive Board. Canada is heavily involved in this story.
I am not certain whether or not you truly understood the severity of the situation in Fall 2010.
To me, it was also the unknown, becoming far too big over time.
[…]
I cannot accept that Switzerland would keep their doors open to a foreign criminal, his family and his money, instead of supporting its own citizens.
[…]