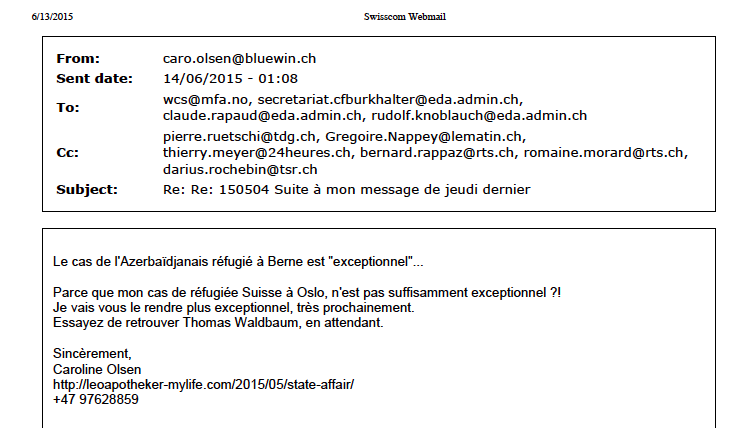 October 2014: Another attempt at an amicable settlement with Léo Apotheker. The last thing I want is war, so it’s worth another try. In vain.

Tuesday, October 14: Current SAP CEO Bill McDermott’s book, Winners Dream, is released. That same day, the wife and son of Thomas Waldbaum – the lawyer who discovered the truth about SAP’s practices – are assaulted in France, just days before another meeting between Thomas and Lionel with lawyer William Bourdon. Lionel notifies the French and Norwegian police. Håvard Lunde has therefore been informed twice; once through me and again through Lionel.
Following the assault of his family, Thomas disappears.
The four hundred pages of evidence against SAP are now in the hands of William Bourdon.
Lionel and I have lost all contact with Thomas.

Friday, October 17: Lionel finds himself alone in William Bourdon’s office. Thomas did not show up. Still no news from him.
Lionel, seemingly determined to eradicate SAP (and the French authorities linked to his part of the case), steals the confidential files that Thomas entrusted to William Bourdon from the latter’s very own office. These files are worth more than SAP’s market value. Needless to say, there are copies of these invaluable files.
Yes, there is enough material to make a film.

What follows is a series of strange events:
William Bourdon does not seem at all phased by the disappearance of fundamental evidence from his notorious law firm.
He continues his collaboration with Lionel, fully aware of the latter having stolen documents from his office.
He does not seem worried about his missing client, Thomas Waldbaum, whom the stolen files belonged to. He suddenly has no intention of coming to Oslo to speak with me in person, nor simply to speak with me on the phone.
He shares confidential information about me (resulting from his exchanges with Emmanuel Pierrat) with Lionel without my consent.
He clearly has no intention of helping me anymore.
The only document issued by Mr. Bourdon concerning my case lacks accuracy, due to lack of communication.
The interference of Bourdon and Bieder in my affairs with the Norwegian authorities has a strange, sudden and negative impact on my relationship with Håvard Lunde.
In September, Mr. Lunde was professional, considerate, available 24/7 (even on weekends), making sure my daughter and I were ok. We were in frequent contact, both in person and by phone. He even offered his own home as a place to stay, should we need it.
In October, after Bourdon and Bieder have stepped in, Mr. Lunde suddenly refuses to talk to me. He claims that, following a meeting with his boss, he no longer wishes to be associated with the case.

November 2014: Due to the events in October, the progress in our legal journey in Norway is considerably slower. People start coming together to support my daughter and I in this lengthy and costly process.

I remember Lionel mentioning, back in September, that William Bourdon had thought of a different Norwegian lawyer to collaborate with. Early in November, I asked him for the contact details of this lawyer. Surprisingly, I receive this information two weeks later (let’s not forget that this is an emergency situation).
The lawyer in question, Harald Stabell, answers immediately. My daughter and I meet with him the next day.
The meeting ends on an astounding note. Mr. Stabell acknowledges that we have “tried absolutely everything”, and the only choice we have left is to die.
I send an e-mail to William Bourdon. Silence.

Late in November, I get acquainted with Stéphanie Gibaud, UBS France whistleblower. She tells me that she just hired a new lawyer: William Bourdon.
In an attempt to help me, she puts me in touch with Gerard Ryle, an investigative journalist leading the International Consortium of Investigative Journalists (ICIIJ) headquarters staff in Washington D.C., as well as overseeing the consortium’s over 160 member journalists in over 60 countries.
Mr. Ryle and I speak on the phone. He is in the US and travelling to Europe soon, but unable make a stop in Oslo. I on the other hand am unable to meet him in Brussels. Lionel goes on my behalf.
It turns out that Mr. Ryle is a friend of Mr. Bourdon…

December 2014: Since mid-November, I have made several attempts to move the case forward with William Bourdon. In vain. Surprising reaction for a notorious lawyer.

After his meeting with Lionel in Brussels, I have not heard from Gerard Ryle. He had met with William Bourdon in Paris a few days later.
Since early December, Stéphanie Gibaud has ceased to respond to my messages. At the end of November I had informed William Bourdon of my acquaintance with Stéphanie.
Oddly enough, all roads crossing William Bourdon’s office lead to dead ends. Time always tells.

As for Lionel, since the day he took those files from Bourdon’s office, he cares only for himself, for his own case, in his own way.

The icing on the cake?
In mid-December, my conversations with Mr. Bourdon, Thomas and Lionel mysteriously disappear from my smartphone and computer. Someone is trying to hide their tracks. Except that I am one step ahead; I backed everything up in advance. It is not just Thomas’s files – the ultimate threat to the SAP empire – that exist in multiple copies.

There are highly compensated lawyers protecting SAP’s crimes, complicit police officers, and governments trapped in conflicts of interest. But this conspiracy is doomed to fail, because humanity is not yet completely lost.

What’s the next step?
You will find out in due time.